In early 1944 the the refinery was attacked by a small force of bombers subsequently returning in ever increasing numbers.  With very few bombs landing outside the perimeter the Germans decided to try and obliterate the factory from view by using smoke generators.  Called 'Raucherzeuger'  the smoke did cover the entire refinery area.  when again, few bombs landed outside the perimeter,  it was decided to send up a spotter plane to see the extent of the smoke screen.  The main powerhouse had three chimneys which were 96 metres  tall,  the spotter plane reported that above the white smoke,  30 meters of chimney were still visible making a good central aiming point for the bombers.
The top 35 metres of chimney were then removed to solve the problem which it did.  The drawback was that bombs were dropped on the total smoke area including all the camps.  Another danger was unexploded bombs in the vicinity of the camps after each raid.

Prisoners who died in the camps were almost exclusively honoured with a military funeral where possible.  Prisoners died naturally when nature took it's course,  some men died during allied air raids and some men died of bayonet or gunshot wounds.  In particular, one man who refused to scale icy steelwork at the refinery during wintry conditions  complained he was not suitably attired to carry out the work was immediately shot.

The prisoners mourners were allowed out of camp to attend the service of internment,  one of the larger sites at Blechhammer was the graveyard at  Ehrenforst.  The mass burial for the men who died during the bombing of the camp on Saturday 2nd December 1944 were buried there.

Christine Knowles founded the British Prisoners of War Books and Games Fund and 'Forget-me-Not' League to help prisoners of war during World War One.  She was also involved in WW2.
During World War Two,  help for prisoners came from many quarters.  Families could send parcels and many independent groups were formed to supply specific items.
In the United States the Inter-National Student Movement and the American Y.M.C.A. in New York worked hard to send items.
The English branch of the Y.M.C.A. also provided much needed supplies along with the famed 'International Red Cross'
Below is a poster Which measures 16 and a half inches by 11 and three quarter inches appealing for help.  Courtesy J Crouch.

Christmas theatre production was eagerly worked on and looked forward to by the prisoners and also by German Officers and guards.  It was not unusual for clothing and other items to be donated by the guards and officers.

If a prisoner was required for any Christmas preparation in camp,  but on factory work detail,  a sick note could be forged,  the man for that was, D Hughes, rfn 1447750 KRRC POW 4675.

A must for the camp at Christmas was  'Hooch'  distilled from whatever the prisoners could get their hands on and was hidden all over the camp ready for the big day.  Nearly all POW camps distilled Hooch.   Friendly guards would take a secret nip when offered, especially after renditions of 'Silent Night' sung in both languages. Small gifts from both sides were sometimes exchanged.

Christmas in Camp
It is a credit to the prisoners that they tried to make camp life as best they could.  Each year that passed in captivity was a learning curve,  anything and everything was used to further the men's  fortitude and resolution adapting to each year in captivity always hoping the war would be ending soon.  Christmas was no exception.

From 1942 onward the prisoners had radios in camp so were able to follow the wars progress which boosted morale enormously,  by 1944 the camp boasted three.  Many German guards would enquire how the war was progressing, choosing to believe the prisoners rather than the propaganda from Berlin told to them by their superiors.

Christmas cards could be traded to send back home.  Some men would design and colour their own, often using a Kriegsgefangenanpostkarte  which were available to all the prisoners.  Others would have a talented pal to draw a scene then colour it themselves using whatever colouring they could make themselves.  Many Ch…
Post a Comment
Read more

Red Cross parcels would be delivered by road transport or train,  unloaded by the prisoners and stored by the Germans for distribution within the camps.  Acts of disobedience and sabotage could result in parcels being held back as punishment.  Also held back could be parcels from home delivered by the YMCA.


Many copies of the above photos showing prisoners unloading Red Cross parcels exist and have been seen by most researchers.  Photos courtesy D Hobbs.  J Crouch. 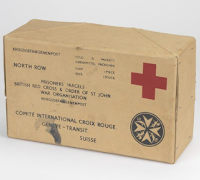 Red Cross parcels became important in many ways to prisoners of war.  The contents, which were badly needed to supplement the food rations in the camps could also be used to barter, not only among themselves but also with the guards.

The two biggest bartering items were chocolate and cigarettes.  Prisoners who did not smoke were in a good position to trade, often boosting supplies by asking for cigarette parcels from home.

Even the string from the parcels was used along with empty cans when the contents had been used.  Blowers and small cookers of all designs were manufactured out of the cans and it became a competition to see which cooker could reach the highest temperature the quickest.

Also used to barter and could only be spent in camp was the  'Kriegsgefangenen Lagergeld'   the money used to pay the prisoners for any work carried out, usually 15 Riechspfennigs per day..  Even  camp guards would accept this money in payment for all sorts of transactions.  Once a camp guar…
Post a Comment
Read more

Below,  a prisoners list of the bombing raids predominantly affecting the southern end of the refinery  at the  POW camp E711 at Reigersfeldt.  Courtesy J. Crouch.


All the following photos of bombers over Blechhammer, courtesy USAAF.  The iconic photo of Lt Col Lokkers aircraft,  credit via James Altoff.